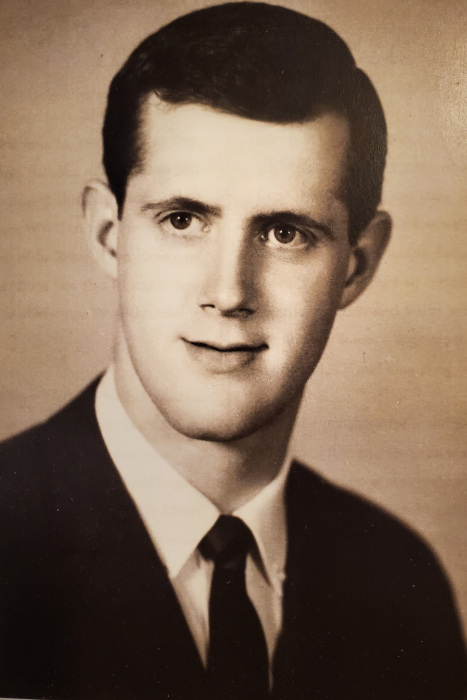 Our dear husband, father, and grandfather, William Dennis Wright, 73, of American Fork, Utah, passed away April 10, 2021. He was surrounded by wife and all of his children, as he peacefully slipped away in Lehi, Utah. Dennis was born June 14, 1947, in Ogden, Utah, the son of Elliott Scoville Wright and Grace Nelson. At 22, he married Carolyn Jonsson, December 19,1969, in the Salt Lake Temple, Salt Lake City, Utah.

Dennis Wright grew up in Odgen, Utah, and later graduated from the University of Utah, earning a Bachelor of Arts degree in Music Education. He would then become a music teacher at Washington Junior High in Ogden, Utah. Though his passion was music, which he continued to enjoy and be involved in, he moved on in careers. He worked for Union Pacific Railroad almost all of his working life, retiring in Omaha, Nebraska, as a data security administrator, in 2010.

From his teen years, into adulthood, Dennis loved to sing with “The Quintet,’ which was made up of his closest childhood friends (Allen Hampton, Richard Maughan, Jim Behling, and Dixon Larkin). It so happened that these close buddies would realize they would stick together as “The Quintet” after singing at their high school talent show. These friends would continue to perform until Dennis’ job with Union Pacific transferred to St. Louis, Missouri, in 1989. “The Quintet” came together three years later to sing at Dennis’ oldest daughter’s wedding reception. It is worthy to note that, prior to moving to Missouri in 1989, Dennis was also a member of the Mormon Tabernacle Choir for a short time and would also be a part of the Layton City Performing Arts community.

After his retirement, Dennis and Carolyn moved to American Fork, UT, in 2010. Dennis became a member of the Timpanogos Chorale of American Fork. He enjoyed having this opportunity to sing again after his retirement. One of the highlights of his time in the choir was performing in Washington D.C with several other choirs from around the U.S. at The John F. Kennedy Center for the Performing Arts.

Dennis served a full-time mission for The Church of Jesus Christ of Latter-day Saints in Scotland, from July 1966 to July 1968. He served in the Glasgow and Edinburgh areas. Dennis also served selflessly in many callings in the Church of Jesus Christ of Latter-day Saints, including High Councilor in Layton, Utah, Bishop and a Patriarch within the St Louis North Stake, Missouri. He also served as a Temple Worker in the Winter Quarters Temple in Omaha, NE. In American Fork, he was a former Branch President of the Bel-Aire Senior Living Center, with Carolyn serving alongside him. This was a calling that they were sad to leave. It brought them great joy to help the elderly residents there. They both gave so much of their time to these residents. Dennis was a spiritual giant. He was dedicated to living a Christlike life.

Dennis was a creative, artistic, intelligent, fun loving man. He was a wonderful teacher, with a knowledge of many things. He not only taught piano lessons and singing lessons, he also loved to write music. He wrote a Christmas song every year and has done so for the past 34 years; having to end his great talent of yearly writing in 2020 because of declining health. Over the years, he wrote a variety of songs for other people. Expressing his love for his children, his wrote a wedding song for each of his four children and sang at their wedding receptions.

Dennis’ talents continued into other areas. He was an amazing cook, though, he experimented a little too often with his kids and wife as guinea pigs, sometimes making concoctions with “whatever was on hand, but shouldn’t be used in combination.” He could sew, usually sewing Halloween costumes when the kids were young. He was an artist, drawing and painting expertly, an avid reader, fascinated with all thing’s science, especially astronomy, and had a green thumb, loving to garden (he always had an impressive vegetable garden and productive fruit trees, while living in Layton.) His talents and hobbies were endless. He seemed to be able to do anything he set his mind to. Dennis loved to have fun. He loved a good joke or pun and would always have a one liner. His wit and humor were loved by all. He loved a good board game and he loved movies. He would bring his family together to enjoy a great family night, playing, talking, and laughing. In later years, he loved to get together with old and new friends. He and Carolyn made some amazing new friends while living in Omaha, Nebraska. They liked to call themselves “The Clovers” and still do to this day. Fun card games, outings together, and traveling together to places such as Boston, Massachusetts, and British Columbia, Canada, were a memorable time for them.

Dennis’ family has been greatly blessed by his love of learning, spirituality, his talents, hard work, creativity, wit, humor. Such a wonderful man, he will be sorely missed. He has touched many lives for good.

Funeral services will be held Friday, April 16, 2021, at 11:00 am, in the American Fork 38th Ward, at 239 East 1100 South, American Fork. A viewing will be held Thursday, April 15, 2021, from 6pm to 8 pm at Anderson & Sons Mortuary, at 49 East 100 North, American Fork, and on Friday, prior to the services, from 9:45am to 10:45 am at the church. See the SignUp Genius links below to schedule a time to attend the viewings. Please bring a mask, as the COVID restrictions are still transitioning and being lessened. Please share a memory of Dennis on his tribute wall. Burial will be in the American Fork Cemetery.

*****For those who are unable to attend in person a Zoom link is provided below. To ensure a smooth transition into the meeting please create a Zoom account (this is free to do) if you don't have one already.

To order memorial trees or send flowers to the family in memory of W Dennis Wright, please visit our flower store.