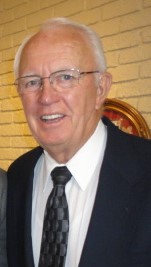 Thank You!
We thank all of our family and friends for the overwhelming love and support that we have received.
We also wish to express appreciation to Anderson & Sons Mortuary for their guidance and services.
You may watch a video of the services scrolling down to the bottom of the obituary.

He was active in sports at North Sanpete High School and was a proud member of the Class of ’55. He attended Snow College where he was also active in sports and received his Associate Degree in Business. At age 18 Vergil helped his mother run the family lumber and hardware business in Fairview after his father’s death and he and his wife continued the business for several years. Later he began working for Metropolitan Life Insurance and shortly after he and his young family moved to American Fork. He soon transitioned to car sales for a short period of time and then he started Peterson & Jolley Real Estate with his partner, John Jolley. He was elected Justice of the Peace for north Utah County in the 1980’s and served one term. He then began his own construction business and became a contractor, building homes in American Fork. Vergil was active in community service, being President of the Chamber of Commerce and a charter member of the Kiwanis club. He was a lifelong scouter and was awarded the Silver Beaver.

Vergil was an active member of the Church of Jesus Christ of Latter-day Saints. He began his service in Fairview as a counselor in the Bishopric, was a Bishop in the American Fork 9th Ward, served on the High Council, was Stake Young Men’s president, served as a Branch President at the MTC, and did volunteer service at the American Fork Hospital Branch. He and his wife served in the Texas, Houston mission and were ordinance workers in the Mount Timpanogos Temple. His testimony of the gospel of Jesus Christ was unfaltering.

Vergil’s most prized possessions were his sweetheart and his family. He loved to tell stories and sing silly songs to his grandkids. He loved the mountains, camping, and woodworking. He was a great handy man and could often be found fixing things for family and neighbors!  And, he was famous for his homemade chocolate chip cookies!

He is survived by his wife, Eileen, his children Cindy Soderquist and Eric (Katie) Peterson, 10 grandchildren and 23 great-grandchildren, his sister Sandra Bryant, sister-in-law Melinda Peterson, and brother-in-law Burke Smith.

The family plans to broadcast the Graveside Service via Zoom. You may join the Zoom Meeting using the following link: https://Dell.zoom.us/j/96235062054  As we all know, there is always a risk that there may be issues with technology, especially when broadcasting from an outdoor location. As we, the family, are managing this broadcast, please DO NOT call the mortuary if you experience technical difficulties. A link to the recording of the Graveside Service will be made available on Monday, June 22nd, for those who may want to watch later or in the event that the Zoom Meeting does not work for you. THANK YOU for your love and support of Vergil and his family!

To order memorial trees or send flowers to the family in memory of Vergil Peterson, please visit our flower store.