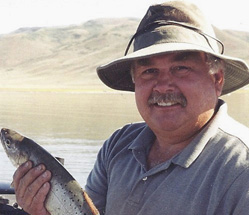 Thomas Ralph Bullock Jr, age 70, a devoted husband, father and grandfather, passed away on Monday, May 31, 2021 at home surrounded by his family.

Tom was born on May 23, 1951 to Thomas Ralph Sr and Betty June Bullock in Birmingham, Alabama, and was the oldest of two children. His childhood was spent in Cahaba Heights, Alabama where his days were filled with adventure and mischief. He thrived most when he was outdoors. Hunting and fishing quickly became lifelong passions.

Tom attended Shades Valley High School where he graduated in 1969. During his time there he met Mary Ann. After several attempts to impress her, his persistence finally paid off. The sweethearts were married on June 16, 1972 in the Salt Lake City LDS Temple.

Tom was a hard worker. He owned and operated Bullock Excavating where he discovered a love for operating machinery. His heavy equipment skills moved his family to Evanston, WY during the 1982 oil boom where he worked for Chevron USA at the Carter Creek Gas Plant. He later transferred to the North Salt Lake Refinery as Senior Terminal Operator. He retired after 28 years of service. Tom held many leadership positions throughout his life. He loved working with the youth and was heavily involved in coaching, Scouting, Hunter Safety, and was an avid outdoorsman.

He had a love for scouting, and is the proud father of three Eagle Scouts. Tom was a Vigil member of the Order of the Arrow, and a recipient of the Silver Beaver Award.  For over 25 years he served his community as a Hunter Safety instructor. In 2015 he received the Instructor of the Year award for his many years of dedicated service.

Throughout all of his life, family came first. Tom cherished being a dad and a grandpa. He sacrificed his time, to love and support while teaching his family. The kids often spent time with him in the mountains hunting, camping, or cutting firewood. He coached several of their sports teams, and if he wasn’t coaching he was on the sidelines cheering. His legacy lives on through his children and grandchildren.

He is preceded in death by his mother and father.

To order memorial trees or send flowers to the family in memory of Thomas Bullock Jr., please visit our flower store.