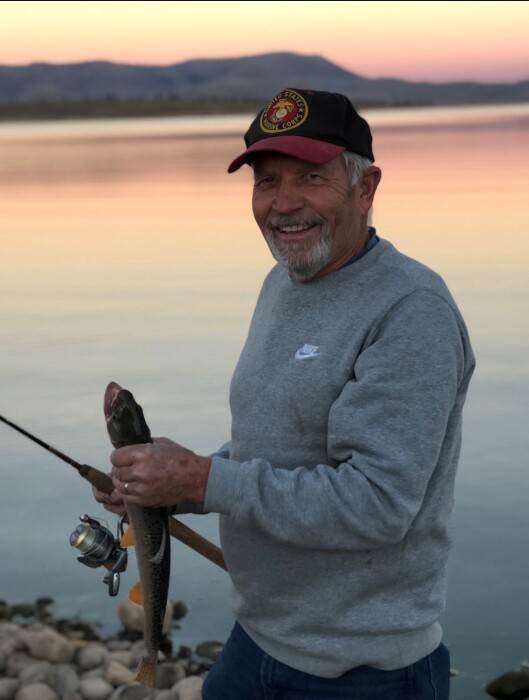 Theron Kenneth Wood passed away on April 2, 2022 surrounded by his family. He was born on August 28, 1942 in Salt Lake City, Utah to Willis and Cordelia Wood and raised by his mother and stepfather William Boam. After graduating from Granite High in 1960, he served a mission for the Church of Jesus Christ of Latter-day Saints in Toronto, Canada. He then served his country with the Marines Reserves. On June 2, 1966 he married his sweetheart, Vicki Mayhew in the Salt Lake City Temple. They were getting ready to celebrate their 56th wedding anniversary.

Theron loved to spend time outdoors fishing, hunting and camping but was at his happiest when he was with his wife, kids and grandkids (unless the fishing was really good). He was a great mentor to many youth as a church leader, coach and friend.

His hands were comparable to 80-grit sandpaper. This came from long days working as a carpenter and home builder. Even though he had strong, tough hands he never lost the soft touch of a father. He taught us all to work hard every day, never complain and never lose sight of the important things in life.

Theron and Vicki served for 12 years as missionaries in Salt Lake City at the Conference Center and Tabernacle where they served and ministered to thousands of people. He was kind and compassionate to everyone he met and knew how to make everyone feel special and loved.

He is survived by his wife Vicki, 7 children; Roger (Lynnette), Jason (Jena), Ryan (Holly), Dale (April), Jeff (Olivia), Julie (Tyler) Adams and Kevin (Ashley). 40 grandchildren and 3 great-grandchildren. He is preceded in death by his daughter Wendy and his parents.

Send a Meaningful Gift or Donation
To order memorial trees or send flowers to the family in memory of Theron Wood, please visit our flower store.