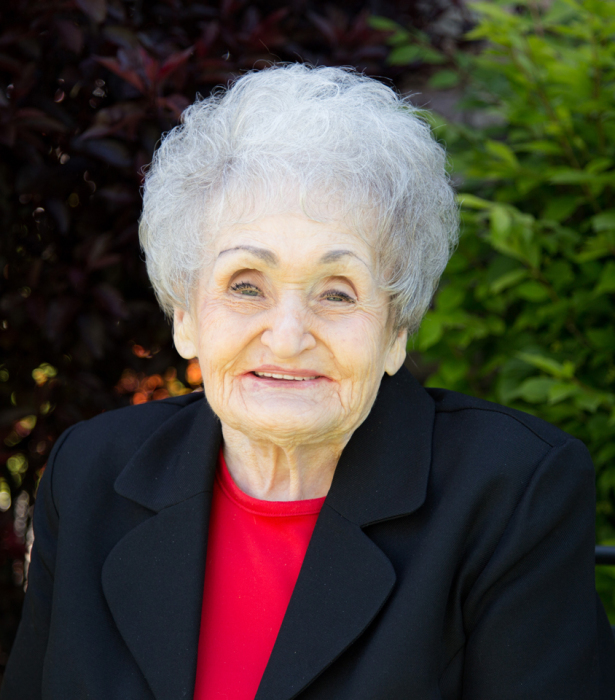 Heaven is sweeter today because Rolleen Littlefield Taysom gained her angel wings July 23, 2019 at home while she was sweetly sleeping. Rolleen was born January, 16, 1929 to Samuel and Ettie Caroline Littlefield in Adamsville, Utah.

Her family resided in Beaver, Utah and she loved playing outside as a little girl. Gathering baby mice and playing house with them was one of her favorite things to do. Rolleen was the second to youngest of eight children and helped her sisters a lot with their own children. After the death of her father, Rolleen dropped out of school because her help was needed at home.

While waitressing, Rolleen mentioned that she would marry the next customer that walked through the door. To everyone’s surprise, a handsome salesman walked through the door selling plates, and that’s when her love story began. Rolleen married Newell A. Taysom on August 29, 1947 in Manti, Utah and their marriage was later solemnized in the Provo Temple on June 16, 1979. They were blessed with two beautiful children, Carol and Brad.

Rolleen and Newell were inseparable and did everything together. Rolleen supported Newell as he owned and operated Taysom Tire in Orem and made sure he had a hot, home-cooked meal every night after work. She loved to make rolls, canned everything she could for storage and loved a tidy home. Rolleen loved to hunt, fish, read books, sew, and quilt. Her love of quilting passed down to her daughter and granddaughters, where many days were spent together with needle and thread in hand. Rolleen and Newell were avid bowlers and she belonged to a mixed double and women’s league for years. She pursued golfing hoping that would be something she liked because that was something else they could do together. Newell and Rolleen were love birds and were often seen holding hands. It has been a long 15 years for her and she could not wait to be with him again.

Animals, especially dogs, were a huge part of her life. Many dogs lived in the Taysom household and all of them were spoiled. Tiger, was a huge part of her later years and was treated like a king. Tiger was fed roast, pie and other human foods and had never tasted dog food. Recently her love for animals focused cats, where she fed the neighborhood cats food, water and milk every day. She loved to watch them through her window and talked and interacted with them through the glass.

Rolleen was a member of The Church of Jesus Christ of Latter-day Saints and was very active in her church callings. She served faithfully as a Primary teacher, Primary president, Relief Society president and teacher. Newell and Rolleen served as missionaries in the Provo Tabernacle (now the Provo City Center Temple) for two years and loved to share their knowledge with the many visitors.

Rolleen was able to reach a lifelong dream of completing her education in 2016, when she graduated from Lehi High school at the age of 87. She walked with her great-granddaughter, Shae, and they graduated together. This brought so much excitement to her and was a great accomplishment. Her graduation was something that she was so proud of and even made the news and newspaper!

Rolleen’s greatest pleasure was spending time with family. She enjoyed hosting Sunday family dinners every other week at her house. She loved interacting with everyone and really was the life of the party. Her sense of humor and things she would do and say made us all laugh. We will miss the fun interactions we had with her so much! She will be deeply missed by all of us. We love you Mom and Grandma!

To order memorial trees or send flowers to the family in memory of Rolleen Taysom, please visit our flower store.