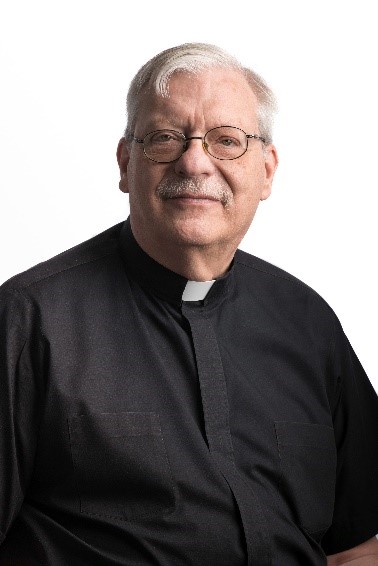 Beloved pastor and chaplain, Father James Edward Blaine died August 31, 2022 at age 72 following a short illness. Born April 23, 1950 in Detroit, Michigan to Edward Blaine and Virginia Pikula, he was ordained a priest for the Catholic Diocese of Salt Lake City on April 30, 1977 in the Cathedral of the Madeleine by the Most Reverend Joseph L. Federal. Father attended Sacred Heart Seminary in Detroit and Saint John's Provincial Seminary, Plymouth, Michigan for theological studies. He is survived by his sister Vivian Price, and numerous cousins.

Until his retirement in 2018 Father Blaine served as pastor of Saint Peter Parish, American Fork for eighteen years and as chaplain at the Utah State Prison for the past twenty-four years. He was also chaplain for the Knights of Columbus, for the Wasatch Deanery Council of Catholic Women and for the diocesan scouting program. Previously Father Blaine was pastor of Saint Helen Parish, Roosevelt and Christ the King Parish in Cedar City.

In every assignment Father Blaine was known for his kindness, patience and care for parishioners and for the local community. He had special concern for the staff and those incarcerated at the State Prison, providing Mass, devotions and counseling each week for twenty-four years. His special passion was the Civil War and his prized library of Civil War works.

The funeral vigil will be held at the Cathedral of the Madeleine, Wednesday, September 7, 2022 at 7:00 pm with a visitation following from 8-9 pm, with the Mass of Christian Burial Thursday, September 8 at 11:00 am. Interment will take place at Mount Calvary Catholic Cemetery following the Funeral Mass. Donations in memory of Father Blaine can be made to Saint Peter Parish, American Fork.

To order memorial trees or send flowers to the family in memory of Rev. James Blaine, please visit our flower store.