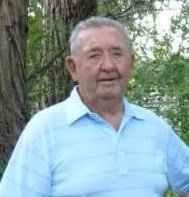 On Saturday, July 14, 2018, Ned L. Vincent, loving husband and father of 4 girls, passed away at age 85 surrounded by his family.
Ned was born on Nov. 9, 1932 to Lynne Vincent & Fawntella Western Vincent. He served 4 years in the Navy, and then enlisted in the Army. He met his beautiful wife Elisabeth Mueller while stationed in Germany in 1963; they were married June 12, 1964.
He continued to serve in the Army and retired after 20 years of service. They have lived in many places. Germany, Texas, Missouri and Washington to name a few.
They decided to settle down and raise their girls in Utah. He has always been a hardworking man and continued his career as an Automotive Machinist. He enjoyed working on cars and really appreciated the "classics".
He enjoyed camping, hunting, fishing and spending time with his family. He would tell awesome stories of when he was growing up and how he and Liz met. He had a great sense of humor with a great laugh to go with it. He could fix or modify anything. In fact, his girls made up a new word for his talents-"Nedify". He was also a whiz in the kitchen and would make his mother's famous doughnuts from time to time.
He instilled in his daughters a hard work ethic and always told them they could do whatever they put their mind to. He made sure that each one of his girls could change a tire and maintain the upkeep of their vehicles. His daughters looked up him with such pride and love. In their eyes, he really could not do wrong. All four were Daddy's Girls. He loved animals, so they would make sure to ask Dad if they could have a pet because more than likely he would say yes.
Ned could spark up conversations with anyone and would while walking down a grocery store aisle or getting gas in his car. He was somewhat of a social butterfly after Mass on Sundays. As he would say, "Well, we are in the "social" hall, may as well be social." He was a pretty darn good dancer. He could cut a rug with the best of them.  His favorite was the Jitterbug.
He and Liz would travel to Germany to visit her family as often as they could. Her family adored Ned and loved that he made their daughter very happy.
He believed that you should respect others…and that respect should be earned and not assumed by one.
Ned got along with everyone and people just enjoyed being around him. His family and friends will miss him dearly.
He is survived by Liz, his wife of 54 years, and their 4 children: Rita Sorenson, Kathy Sweat, LaPreal Vincent and Jo Lynn Sibert. 6 grandkids: Chrystal Beagley, Heather Crookston, Cameron Crookston, Rylee Sibert, Sydney Sibert and Tanner Sibert, 2 great grandkids: Matix Fisch and Raquel Crookston, and 2 wonderful son-in-laws: Don Sorenson and Colby Sweat. Two siblings: Sherl Vincent and Gayla Beatty.
Preceded in death by his parents and two brothers: Keith and Karl Vincent.
Funeral services will be Wednesday, July 18, 2018 at St. Peter's Catholic Church at 634 Caveman Blvd, American Fork, UT. 84003. Visitation from 9:30 am to 10: 30 am. Followed by funeral services at 11am. Burail at Utah Veterans Memorial Park.  Please share a memory at andersonmortuary.com.