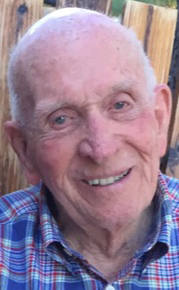 Narion Gale Larsen passed away March 6, 2020 after living a long and happy life of 95 years. Gale was a loving and caring husband, father, beloved Papa, and Papa Great! He was dearly loved and will be missed by his family. Gale was preceded in death by Barbara Stubbs Larsen, his wife of 76 years.  Also preceding him in death was their son, William Larsen (Carol) in 1985, their daughter, Marsha Moore (Jim) in 2011, and their grandson, Michael Moore in 2009.


Gale was born in Milford Utah, August 20,1924 to Joseph Andrew Barker and Armenell Johnson Barker. Gale and his younger brother were raised with the help of his grandparents in Provo, Utah until the age of 13 when his mother married John Larsen. Gale attended Lincoln High School where he played football and was given the name of the “Swivel Hipped Swede”. At 17, Gale joined the US Navy and served in the South Pacific during WWII. Later he was commissioned as an officer in the US Army and chose the military as a lifelong career, retiring in 1969 as Lt. Colonel with over 23 years of active duty service; including 11 years of foreign and or sea service.  He then went on to teach ROTC for the Albuquerque Public Schools. Gale enjoyed playing golf and bridge, gardening, and spent time in his retirement years tending to his and Barbara’s vineyard on Stubb’s family farm in Lakeview. The time he treasured the most was spent with his children, grandchildren and great grandchildren.


Gale is survived by two daughters, Patti Call (Don) of Highland, UT., and Susan Weiland (Lynn) of Pagosa Springs, CO. He is blessed with 13 grandchildren, 29 great grandchildren and 1 great, great grandson.The family would like to thank Hospice for Utah and the staff of The Charleston at Cedar Hills for their compassion and care for Gale over the past several months. A private family celebration and memorial service will be held to honor his life. In lieu of flowers, please send contributions to a Veterans Organization of your choice.

To order memorial trees or send flowers to the family in memory of Narion Larsen, please visit our flower store.