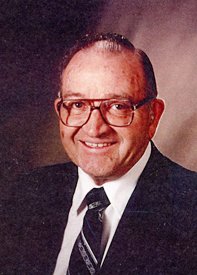 Melvin Robert Kitchen of American Fork, Utah passed away peacefully on June 25, 2018, with family members close by his side.  Melvin was born August 16, 1922 in a humble log cabin in Tridell, Utah to Joseph Levi Kitchen and Blanche Cook.  He served honorably in the U.S. Army Air Corp, first receiving training to be a fighter pilot, ultimately becoming a Radio Repairman in Boeing B-29 Bombers. He has been a wonderful example of faith, charity, hard work and enduring to the end for all whose lives he has touched. His family and his faith came first.  Serving and caring for others was always important to him.  He graduated from Utah State University, became the County Agent for Piute County, Utah and moved to Utah County and worked for Geneva Steel as a environmental engineer until he retired.  He then opened his own environmental testing company known as TETCO.  He has served as bishop twice in the same ward, American Fork First Ward and Stake Patriarch for the American Fork Stake for the LDS Church.  He and his sweetheart companion, Verda, served two full-time missions for the church in Great Britain.  He has been actively involved in family research for his own ancestors as well as for others.  He has served as the Director of the Family History Center in the Alpine Tabernacle when the center was first opened there.  He has written and published seven family history books with one more about to be published.  He was a temple worker for the Timpanogos Temple as well as providing hundreds of names for temple work.  Melvin was well known in the community for his work with the Boy Scouts of America where he was honored with the Silver Beaver Award.
He married Verda McKee on November 14, 1945 in the Salt Lake Temple. He is survived by 9 children: Connie (Robert) Goss, Lucinda (Terry) Kemp, Vivian (Duane) Harding, Paul (Sheryl) Kitchen, Boyd (Kathryn) Kitchen, Stanley (Christine) Kitchen, Newell (Suzanne) Kitchen, Lynn (Leslie) Kitchen, and Kevin (Nelly) Kitchen.  He is also survived by three of his ten siblings, Ralph Lenford Kitchen, Lea Mae Hatch, and Weldon Kitchen are siblings that have survived him. He was preceded in death by his infant son Larry in 1949, his wife, Verda McKee 2010, his parents and 7 of his 10 siblings (Blanche Lazelle, Virginia, John Levi, Frances, Belva, Norman Ray, and Maxine). Melvin is Grandpa Kitchen to 51 grandchildren, about 101 great grandchildren and 3 great great grandchildren.
Prior to the funeral a viewing and visiting hours will be held on Sunday, July 1 st from 6:00 to 8:00 pm at Anderson and Sons Mortuary, 49 East 100 North Street, American Fork. Funeral services will be held at 11:00 am, Monday, July 2 nd at the American Fork First Ward Chapel (381 South 300 East, Am. Fork).  Friends and family may pay respects at the First Ward chapel from 9:30 to 10:45 am immediately prior to the service. A second memorial service will convene July 3 rd at 1:00 pm in the Tridell Ward Chapel.  Interment will follow at the Tridell Cemetery at 2:30 pm. Please share a memory at andersonmortuary.com.