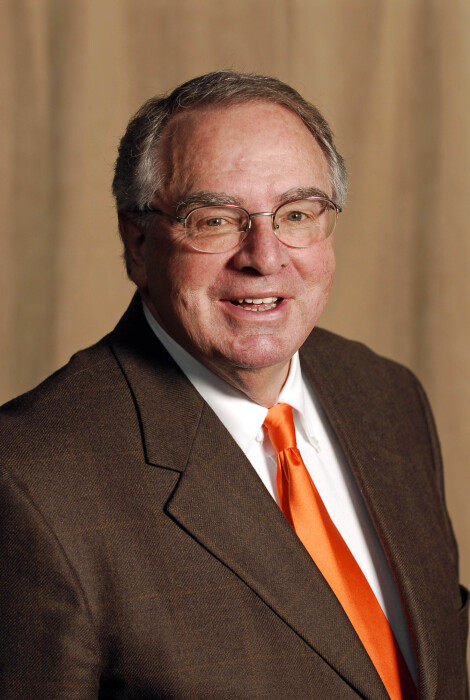 Larry Cecil Edwards was born November 17, 1935, to Norma Bradshaw and Edgar Cecil Edwards in Manderfield, Utah. Larry grew up in Milford, Utah, playing basketball and football. He served an LDS mission to the Northern States Mission. One of his greatest joys was to watch three special families that he helped convert, grow in the gospel and to have them and their descendants serve missions. He was most proud that all six of his children chose to serve missions. His grandchildren are now continuing that legacy.

After their missions, Larry and Mary Beth Salmond were married in the Salt Lake Temple on August 26, 1958. Last year they celebrated 62 years of marriage together! With the exception of his many business trips, they did most everything together, including road trips throughout the United States and Canada for recreation and family history. Larry was enthusiastic about all of his pioneer ancestors and served as president of the local Timpanogos Sons of the Utah Pioneers.

Education was very important to Larry. He attended BYU and Utah State University. He received a job offer just shy of graduating from college to join IBM. He promised himself he would one day return to graduate. In 2018, he received his bachelor’s degree from Utah State University and was proud to show off his diploma to his grandchildren.

Larry was a pioneer in the computer industry. He started his career with IBM and also participated in the start-up of Novell. His work took the family to Oregon, California, and eventually, Utah. He was instrumental in developing networking and applications of personal computer technology. After retiring from the computer field in 1992 he went on to the real estate and insurance industries.

One of Larry’s greatest loves, besides his wife, was sports. As a freshman at BYU, Larry recalls spending every extra minute in the Smith Fieldhouse playing basketball, and eventually was invited to tryout for the freshman team. Larry enjoyed coaching all of his boys in various sports. He was also known for bringing Youth Soccer to Alpine in the 1970s. Larry especially loved watching his children and grandchildren play sports. He never missed any of his children’s or grandchildren’s games, and sometimes made it to FIVE games in one day. It is said we should not be prideful, but he admitted he was guilty of this because he was so proud of his children and grandchildren and all of their accomplishments.

Larry had a deep love of the Savior and was always willing to serve wherever needed. He served in many capacities throughout his life and loved working with the Young Adults at BYU as a bishop and then in a BYU stake presidency. He took every opportunity to share his testimony and encouraged his family to stay close to the Savior.

One of Larry’s greatest heartaches was the passing of their daughter, Mary Lee, in 2006. Larry passed away peacefully, surrounded by his entire family. Larry is survived by his wife, Mary Beth, Brent (Janine), Greg, Robert (Jen), Darin (Brenda), Terrence (Margot), 20 grandchildren and 12 great-grandchildren.

Funeral services will be held on Saturday, March 13, 2021 at 10 AM with a viewing at 8:45 AM at the Alpine 7th Ward chapel: 890 Heritage Hills Drive, Alpine. Please see the SignUp Genius link below to schedule a time to attend the viewing. Please share a memory on Larry's Tribute Wall.

To order memorial trees or send flowers to the family in memory of Larry Edwards, please visit our flower store.