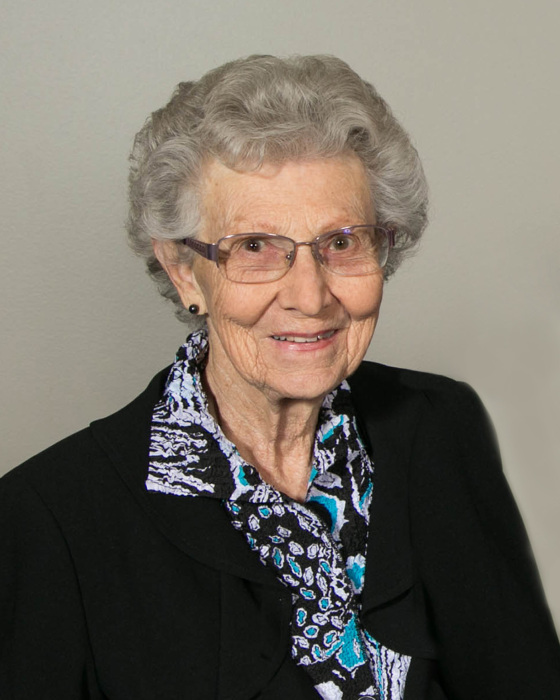 She was the yearbook editor and secretary of her senior class at American Fork High School on the hill, graduating in 1947.  She then attended LDS Business College and worked as a secretary at the celery plant in town.

LaRae married Kenneth Cornelius Savage, a dashing Navy veteran who was also the boy next door, on August 10, 1948.  They were later sealed in the Jordan River Temple.

In 1972 LaRae began her studies at Utah Technical College (Trade Tech) in Provo graduating at the top of her class as a Licensed Practical Nurse (LPN).  She worked on call at American Fork Hospital and for various doctors for over twenty years.

LaRae liked to be independent and take care of herself as well as others.  She also loved supporting good causes such as scholarships for nursing students and young women at BYU.

She loved the outdoors, especially time spent at the family cabin in American Fork Canyon.  LaRae also loved going deer hunting with Kenneth and his family.  She could spot animals in the wild and loved pointing them out to her children.  LaRae was an adventurer, she loved traveling and exploring the world with Kenneth.

Her service in the Church of Jesus Christ of Latter-day Saints included being a temple worker until nearly two years ago, Relief Society president twice, Primary president, Young Women president, as well as being a teacher and a counselor in those organizations.  She also served as a Sunday School teacher, compassionate service leader, a visiting teacher/ministering sister in Relief Society, and as Young Women camp director many times.  Her favorite calling was as a nursery leader.

LaRae and Kenneth served as missionaries at Cove Fort, Utah from March until August 1998.  Later, after Kenneth died, LaRae was called by President Stephen Studdert to serve as a sister missionary in the California North Carlsbad Mission.

LaRae is preceded in death by her parents, husband Kenneth, brother Jacklin Tracy, and her grandchildren Justin and Chancelor Savage.

Thank you to the nurses at Dignity, especially Mom's hospice nurse, Jordan, for taking such wonderful care of our mother for the last eleven months.   We appreciate everything you did for her and for our family.

In lieu of flowers, one may donate to American Fork Friends of the Library for the Ellen Tracy Room in honor of LaRae Savage.

Please click on the link below to watch LaRae's service via live stream: https://us02web.zoom.us/j/84249958465?pwd=b2YyMFgrWmhmK2kxVDlCWUFlVlpIdz09

Please share a memory on LaRae’s Tribute Wall at www.AndersonMortuary.com .

Send a Meaningful Gift
To order memorial trees or send flowers to the family in memory of LaRae Savage, please visit our flower store.