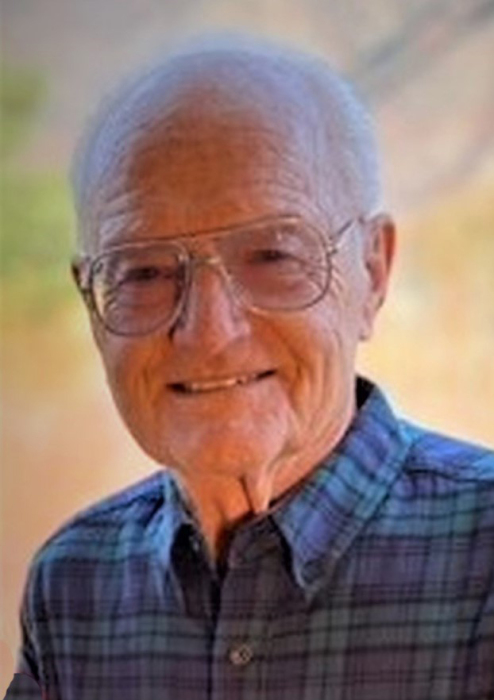 On Saturday evening, January 22, 2022, LaMar H Drew stepped through the veil surrounded by his wife, four daughters, and other family members.  His passing came after a short, rough patch brought on by a myriad of causes due to his advanced age.  He was 91 years and 26 days old at his passing.  He is survived by his loving wife, LaRene, his four daughters, Robyn (Wayne Allred), Karrie (Harry Schmid), Lesa (Dave Mecham), and Camile (Brendan Krelle), 18 grandchildren, and 26 great grandchildren with one due in May; a total posterity of 65.

All who knew him recognized his indomitable spirit; he was always upbeat, kind and positive no matter the challenges.  Until the end, he expected to live to be 100.

LaMar, second child of Elwood Drew and Annie Aleta Huggard Drew, was a husband, father, grandfather, mentor, teacher, adventurer, and faithful disciple of Jesus Christ.  He was born on December 27, 1930, in Alpine, Utah, where he lived his entire adult life with exception of his military service.  He married his beautiful sweetheart, LaRene Beck on December 4, 1950 in the Salt Lake Temple.  They were sealed for time and eternity by Elder Harold B. Lee of the Quorum of the Twelve Apostles.

He loved his family, always providing for, taking care of, and seeing to the comfort of his sweetheart LaRene.  Always a teacher, he supported and mentored his four daughters and their children.  Many of his posterity can tell you about the various plants, mountains, and rocks of the region and all have memories of special things LaMar patiently explained to them.  Known to be soft spoken, he is greatly beloved by his family and entire expanded community, always treating everyone with love and respect.

After finishing a military commitment, LaMar worked his way through college at BYU as a barber.   He graduated with his Bachelor’s Degree and teaching certificate, then pursued graduate studies earning his Master’s Degree in Education and Administration and worked toward his PhD.

LaMar treasured time with LaRene, his daughters, along with his sister and brothers and their families.  He and his girls took frequent camping trips with Max and Kathleen, Vernon and Cleo, Renae and Fred, Rea and Lloyd, and Deanna and Ken.  It was important to him to make sure that the camp was set up just right and to see to everyone else’s comfort.  He also treasured his time hunting, horseback or motorcycles with his good friends, Earl Stucker and Keith Wilson, and he had a passion for skiing with friends and his girls.  He kept himself in great shape and was proud of the free ski pass he earned when he turned 80.  His life’s highlight reel would likely include helicopter skiing above Alta, hiking Timpanogos and other mountain trails.

Possessed with boundless energy, he built two houses (mostly by himself) while holding multiple full-time jobs including teaching and as an elementary school principal.  After finishing his last home, he worked as an electrician while still a principal.  He spent many summers working as a tour guide at Timpanogos Cave.  Even at an advanced age he did electrical work while he kept a large garden.  Both his gardening and his electrical expertise were shared generously with everyone in the family and community.

LaMar was completely invested in his community.  He was a great resource, quick to share his wealth of information about the geography and pioneer history of Alpine and surrounding areas.  He loved Utah’s national parks and wilderness areas, spending time on his various motorcycles, hiking, and enjoying Capital Reef, Canyonlands, and surrounding areas.  One of his passions during the last season of his life was improving the historic Dry Creek logging trail northeast of Alpine.  Enlisting the aid of willing friends and family, he worked relentlessly to build a log bridge and clear undergrowth, making it one of the most popular and beautiful hikes in the Alpine mountains.

A life-long member of the Church of Jesus Christ of Latter Day Saints, LaMar attended church faithfully his whole life with his wife, LaRene.  While he held callings, he was always more comfortable helping with an electrical problem, pitching in at the welfare farm, or just quietly giving or helping out in some way that few, if any ever knew.  He was of a time and generation reticent to draw too much attention to himself.

Lamar’s passing leaves a void that in many respects may not be filled.  During his last years, he was known to observe that he and LaRene were the oldest married couple born in and still living in Alpine.  Much of his knowledge of the history and past culture of the area is now with him on the other side.  However, his legacy lives on in the passions, memories, and character traits passed on to future generations through his family and friends, of which he was most proud.

LaMar is survived by his wife, LaRene, their four daughters, 18 grandchildren, 26 great grandchildren, and his brother Lee (Connie) Drew.  He is preceded in death by his parents, Elwood and Aleta, and LaRene’s parents, Leland and Verland Beck, brothers Bob and Stanley, and sister Dorothy Loveridge.


If you would like to make a donation, in lieu of flowers, you can donate to Alpine Trails in memory of LaMar Drew. Please call Alpine City and ask for Carolyn 801-756-6347.

Please click on the link below to watch LaMar's service via live stream:

Click Here to Send a Meaningful Gift
To order memorial trees or send flowers to the family in memory of LaMar Drew, please visit our flower store.