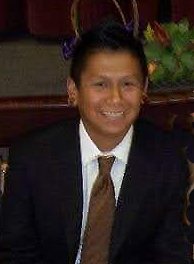 Konrad Lee Hosteen, passed away from a short term illness while asleep on October 17, 2021 in his home in Highland, Utah.  Konrad was born August 1st 1981 in Farmington, New Mexico. Born into Tangle Clan, for Red Running into the Water. His maternal grandfather's Tobacco clan, his paternal grandfather the Clumped Tree clan. His parents Ryan Lee Hosteen and Jennifer Rita Nopah Hosteen. He grew up in Northern New Mexico and is of the Dine’  tribe. He married Rosanne Hampton on November 10, 2010  in Highland, Utah. They had been together for 15 years.

Konrads Kids and wife were his world. He worked hard to provide for his family.  He loved watching movies, playing games, drawing, cooking , laughing  with his kids, and traveling with his family.  Konrad was an excellent cook , he made the best fry bread and steak, He was a talented artist in drawing, painting, and tattoos.  Every October using his imagination created the most wonderful Halloween costumes for his children.  He was very supportive of others' needs, big or small. He had been riding BMX since he was ten years old. He taught his kids many things including how to ride their bike. He enjoyed hiking, and camping.  He loved his dog Flash, he would carry him everywhere with his family in a baby carrier.

He was preceded in death by his aunt Jeanette Rose Nopah and uncle Lamont Mecham.

Funeral Services will be held on Friday, October 22, 2021, at 11:00 AM at Anderson & Sons Lone Peak Chapel.  Burial will be in Highland City Cemetery.

Send a meaningful gift or donation

To order memorial trees or send flowers to the family in memory of Konrad Hosteen, please visit our flower store.