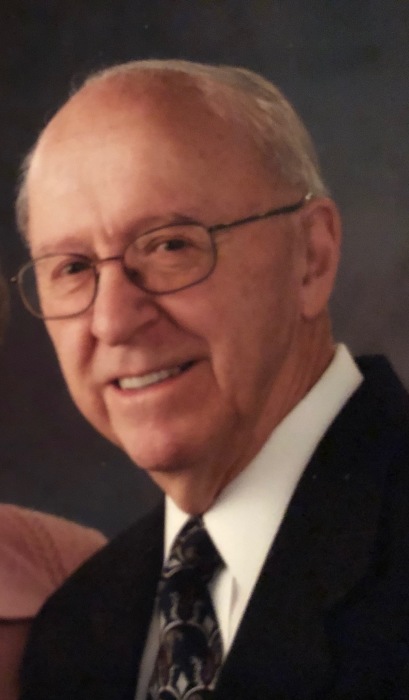 Kay Hislop Allen, age 90, peacefully passed away on Monday, April 15th in Daybreak, Utah. Kay was born on March 4, 1929 to Jesse and Viola Allen of Tooele, Utah. He was known for his gentle smile and calm nature. In his early days, Kay could be found fishing or playing his trombone. While attending the University of Utah he scored the love of his life in a chemistry class... and it was a love for the ages (they’re are still talking about it at the nursing home). Mae Allen of Salt Lake City, Utah (same last name, it’s true) agreed to marry him and together they raised 5 children, became pharmacists, owned and managed a grocery store and pharmacy (Allen’s Food Fair), and worked side-by-side as pharmacists at American Fork Hospital. If you knew him when he was in his prime, you would have witnessed him taking groceries to the door step of someone in need, perfecting his DIY skills by fashioning a ping pong table out of store display drawers, taking the time to read a book to any child who climbed up on his lap, working tirelessly to provide for his family, and serving as a great example of an honorable man. Later in life, Kay went on to serve his Heavenly Father through many church callings and missions as well as temple work. He poured his heart and soul into the lives of his wife, children and grandchildren and never missed an opportunity to show love and compassion. His memory will live on to remind us how to be a person of character, to be honest, to be kind, and to love other people well.

Kay is preceded in death by his parents, Viola and Jesse Allen of Tooele, Utah; his brothers, Clyde and Shirl; his sister, Deon; as well as his wife, Mae Allen. He is survived by his children, Mary (Cleo) Lyman; Christine (Lynn) Mehner; Shauna (Bill) May; Scott (Dina) Allen; Mark Allen; 20 grandchildren, 41 great-grandchildren, and 4 great-great-grandchildren.

To order memorial trees or send flowers to the family in memory of Kay Allen, please visit our flower store.