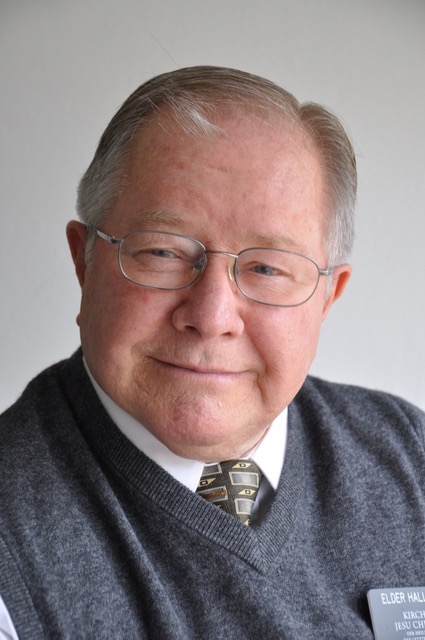 Joseph “Ron” Ronald Halliday, 85, passed away July 29, 2019 at his home in Highland, Utah. He was born to Vere C and Erma A Stevenson Halliday in Salt Lake City, Utah, and grew up there and in Holladay, Utah. He married Irene Hardy on June 28, 1962 in the Salt Lake Temple after serving two years in the United States Army and two and a half years in the Swiss-Austrian mission for the Church of Jesus Christ of Latter Day Saints. He attended school briefly at University of Utah, then graduated with Irene from Brigham Young University in 1963 with a bachelor’s degree in music education. His love of the gospel of Jesus Christ and of all people led him to work for the Church Education System as a seminary and institute teacher, with several seminary assignments in Utah and six years teaching institute in Washington state and California. He then shared his love of music with his students at Pleasant Grove Junior High where he taught band for twenty-two years. He served three years as bishop of the BYU 26th ward, 3rd Stake, and one and a half years as bishop of the Highland 9th ward, Highland Utah East Stake. He served in many other capacities within the Church, but enjoyed above all the four years he served in branch presidencies at the Provo Mission Training Center (2004-2008). Ron loved missionary work. He would talk to anybody, anywhere, at any time, recognizing all as beloved children of God. This and his love for the word of God led him once again into the mission field, but this time with his sweetheart, Irene. They served two missions together: the first in Frankfurt, Germany from 2009 to 2011, and the second in the Utah Orem Mission, serving in their own stake from 2016 to 2017.

All who knew Ron knew he loved his family and his Savior. Both were everything to him, but he was also known for his beautiful tenor voice and for his skill as a musician, talents that he shared freely and continuously throughout his life. He loved to read and learn, and though he had no experience, built his home in Highland with his own hands. He felt that all he learned in the process was better than a college degree. He learned how to garden and care for farm animals. He loved getting out into nature, fishing and boating. He loved shopping for cars and “taking a drive” to wherever the road might lead. He was soft-hearted, humble, loving, loyal, generous, and wise. Ever the teacher, he studied the scriptures endlessly and shared what he learned with his large family, always anxious for their happiness.

To order memorial trees or send flowers to the family in memory of Joseph "Ron" Halliday, please visit our flower store.