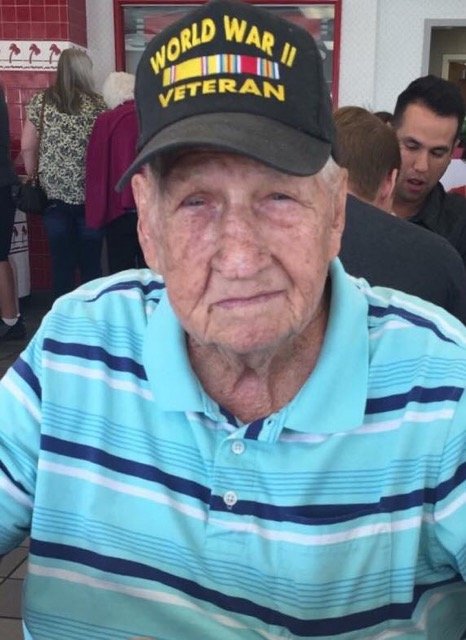 Jennings (Bud) Bryan Cook was born in Tampa, Florida on October 31, 1923, son of Jennings Bryant Cook and Zatha Fern Seufferelein. He was the second of four children and the only boy.  He was good to his sisters (Margie, Katherine, and Barbara). As a young boy, his family moved to Hollydale, California. He went to South Gate High School and worked for Royal Farms Dairy at 16 years old and bought his family a home.  After high school, he went straight into the Navy. (WWII). It was during this time that met his sweetheart, Katie Grace Baxter. While on a two-week leave he and Katie were married on January 8, 1945, in the Huntington Park, CA LDS Stake House. During his service in WWII, Bud made invasions on 8 islands and was wounded on the island of Tarawa. He carried shrapnel in his leg the rest of his life and received a Purple Heart medal, which was pinned on him by Admiral Chester Nimitz.
Bud and Katie were soon blessed with 3 children: Timothy, Jeannie, and Mark. His mother passed away and Bud gained another wonderful sister, Debbie, when his father remarried.
Bud and Katie lived in several places, including San Jose and Freemont, California. But they ended up back in Southern California where Bud worked for 20 years repairing airplane fuel tanks and traveled all over the world, including 17 trips to Norway.  Eventually, Bud, Katie, Mark and his children moved to Utah. While in Utah, he worked for 19 years at the Lindon Boat Harbor.
Bud was a caring, compassionate, patient, giving and self-less man, whose life and legacy will be celebrated for centuries to come.
"Bud is survived by his sisters Katherine Koster and Debbie Naffziger-Chilton, his children Jeannie (Dave) Reeve and Mark Cook, his grandchildren Todd Reeve, Bryan (and Shandie) Reeve, Kendall Reeve, Marc Reeve, Chris (and Stephanie) Cook, Nicholas Cook, Timothy Cook, and his great-grandchildren Brianna Cook, Dylan Reeve, Jenna Reeve and Kali Reeve, Ryker Cook, Aspen Cook, Kaiya Cook, and Merrik Cook.
Funeral services will be held Friday, January 4, 2019 at 11 am at the Hillcrest 4th ward, 680 North 350 West, American Fork. A viewing will be held prior to the service from 9:45 am to 10:45 am. Burial in the American Fork Cemetery. Please share a memory at andersonmortuary.com.