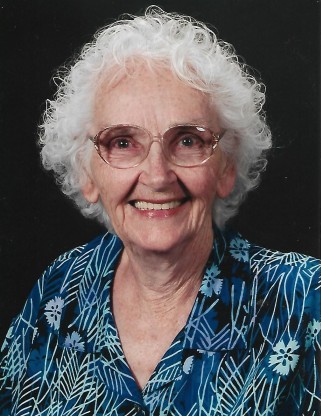 Heaven was elated and throngs of angels joyfully welcomed Gilda Louise Johnson into heaven on the 24 February 2019.  God saw she was getting tired so he put his arms around her and whispered, “Come with me.”

She was born 30 June 1925 in Cody Wyoming to Frank and Bertha Olson Hayden.   An active member of the Church of Jesus Christ of Latter-day Saints, she served a Stake Mission in Denver, Colorado in 1952-53 and later graduated as a Golden Gleaner in 1961.  She attended Brigham Young University where she graduated with high honors in1962.  After that she taught Kindergarten at Lindon & Geneva Elementary schools for 25 years.  She was loved by all who knew her.

She was known all her life as Louise and is preceded in death by her husband Ferron Johnson, Theodora B. Mittendorf, a sister, Ferron Cody Johnson, step-son, Joy Johnson Anderson, step-daughter, Jessica Ann Johnson, a granddaughter.

They worked hard to make a blended family, teaching the kids how to hunt and ski, go camping and river rafting.  They held regular family reunions for many years and the children and grandchildren have fond memories of the happy times they had with each other as they grew and learned to love each other.  Ferron and Louise loved the out-of-doors and had many adventures.  One they enjoyed year after year was the Easter Jeep Safari in Moab, Utah. They also rafted several times on the Green River.  In their later years, they moved to Quartzite Arizona each winter and had many friends.  They loved the rock and craft shows there.  Louise quilted beautiful quilts, crewel stitcheries and loved to draw and paint.  She read books voraciously and was interested in the freedoms of this country.  That patriotism she passed on to the next generation.

To order memorial trees or send flowers to the family in memory of Gilda Johnson, please visit our flower store.