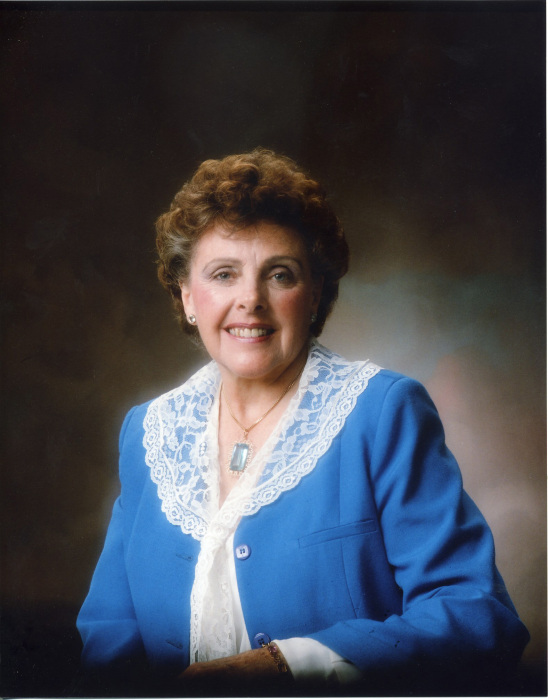 Geraldine Hamblin Bangerter, 97, valiantly and joyfully completed her earthly labors on Mother’s Day, May 9, 2021 at her home in Alpine, UT.  She had “Welcomed the Task” since the day she began her life on March 3, 1924, in Salt Lake City, Utah. Geraldine was the second of four children born to Henry Marcene Hamblin and Duella Eyre. The family’s circumstances were humble, but it was a home richly endowed with musical talents and a heritage of happy industry. They were bound together with love and fierce loyalty. Geraldine entered the mortal stage with an arsenal of useful gifts: determination, a love of fun, a love of learning, a fiery disposition (spunkiness), an early recognition of God and restored truth, and an ability to love all the people who came into her circle.  As she aged, her gifts grew within her until her person defined unselfish love. A tomboy at heart, and always up for fun and social activity, Geraldine enjoyed softball, golf, skiing, bowling, camping, fishing in her beloved Uintah Mountains, and riding horses in the mountains above Alpine. By far, her most finely tuned hobby and skill was, unashamedly, getting children to work.

Little Geraldine attended Arlington Elementary School in Murray, learning to play the trumpet in the second grade. She mastered this cherished instrument in the marching band while attending Murray High School and later while attending the University of Utah. Soon after high school graduation in 1943, “Geri” joined the United States Cadet Nurse Corps with a desire to aid the nation's World War II efforts. Recognizing an opportunity to advance her education, she began her training at the St. Mark’s Hospital School of Nursing. After receiving her nursing diploma in 1946, Geri moved to Rawlins, Wyoming, to assist her brother, Dale, in a “spudnut” venture, so popular at the time.  In Rawlins, Geri worked as a registered nurse in the emergency room, and also in surgery and obstetrics. These were invigorating times with "never a dull moment" in that cowboy town. In addition, Geraldine took the position of school nurse for the county school district (1949-1953). There she developed the philosophy that each child had a specific genius and learned the phrase so oft repeated as a gentle reminder: "Children are people too."

During 1949-1951, Geraldine enrolled again at the University of Utah, commuting back and forth between Salt Lake and Rawlins and in August 1951 obtained her bachelor’s degree in nursing, fulfilling a promise she had made to herself years earlier. Geri switched gears in 1953 and began teaching at the St. Mark’s School of Nursing. She applied to Columbia University Teacher's College in New York City, with her sights on earning a master’s degree in public health administration. These plans were intercepted when she met a handsome widower, William Grant Bangerter, a young bishop from Granger, Utah (Mildred Lee Schwantes, 1918-1952). Grant and Geraldine and his three precious children (LeeAnn, Cory William, and Glenda) decided to make it a five-some, and the couple was sealed on October 14, 1953 in the Salt Lake Temple. Geraldine became an instant success as wife and mother of three.

From an early age Geraldine recognized and cherished the gospel truths as taught in The Church of Jesus Christ of Latter-day Saints. Her desire to serve in the kingdom was strong and evident. As a young teenager she began a lengthy service as the leader over the Junior Sunday School in the Millcreek Ward. In Wyoming she served as a stake missionary, a Sunday School teacher and a counselor in the MIA. Upon her marriage to “Bishop Bangerter,” she was called as the stake speech director and also began a new chapter of serving by her husband’s side as he fulfilled callings as bishop, president of the North Jordan and Granger Stakes, and then in 1958-1963, as President of the Brazilian Mission. There, Geri was called to preside over all the Relief Societies in the mission and though just beginning to learn Portuguese, she entered into this task with her innate zeal, delighting in the Brazilian sisters she taught and nurtured. As Mission Mother and nurse, Geraldine took up the challenge of seeing to the missionaries’ health, pioneering standard treatments and protocols to prevent serious illnesses. Her efforts became the nucleus for a missionary health manual later adapted for world-wide missionary use. Grant and Geri claimed their missionary sons and daughters as their own, often saying to them “You belong to us now!”

Church service did not prevent Geraldine from bearing and rearing children. Upon arrival in Brazil, Grant and Geri had six children, three having been added since their marriage five years previously: Julie, Grant Hamblin, and Howard Kent. Upon their departure from Brazil five years later, the family had grown by three: Peggy Brasilia, Glenn Paulo, and Layne Rio. With the inevitable ups and downs of raising a family in the chaos of mission life, Grant and Geri adopted a motto they determined to live by the rest of their lives: “ENJOY IT!”

After Brazil, returning to Granger, Geraldine began serving as a cub scout leader, propelling her into years of dedicated scouting service on three continents, eventually earning the Silver Beaver award. In addition to her church work, Geraldine threw her energies into selling a popular line of home fashions, LeVoys, which met with tremendous success. In 1965 her last child was born, a daughter, Duella, completing the family with five sons and five daughters. These were masterful mothering years. A sweet mixture of deeply imprinted snapshots: mother with her giant mop, mother canning hundreds of bottles of fruit, mother taking care of details on the long cord phone, mother making Spudnuts for Halloween, and mother, demonstrating uncommon tenderness with each of her children.

After the family moved to Alpine in 1970, Geraldine taught the Sunday School gospel doctrine course and continued her efforts helping boys become Eagle Scouts, each boy believing he was her favorite. Alpine living was interrupted when Grant was called as Mission President to open the Portugal Mission in 1974. The pair was just getting started! They crisscrossed the globe where Grant's assignments in the First Quorum of the Seventy bade them and Geri delighted in discovering new friends in every country they visited.  In 1977 they returned to Brazil to preside over that area and help complete the construction of the Sao Paulo Temple. Later they lived and served in Chile. A crowning delight for Geri was serving as matron of the Jordan River Temple when Grant was serving as President (1990-93) and then serving as secretary in the sealing office of the Mount Timpanogos Temple where Grant was a sealer and coordinator. (1996-2003) In and around and through her days, Geraldine filled her cup to overflowing with love for her ancestors and rich pioneer heritage. Researching and writing their histories was her dedicated passion.

In Geraldine's eyes, every day provided a miracle with some blessing to savor. “Aren’t we blessed?” she would ask. Her favorite quote revealed a vital secret to filling her miracle bucket: “Welcome the task that makes you go beyond yourself, and you will grow!”

The Bangerter Family offers our sincere gratitude for the loving, tender care of the nurses and aides who have dedicated their time and love to our Mother, sharing these precious final years with her. You are special angels: hers and ours. “Hey Sis, I love you.”

To order memorial trees or send flowers to the family in memory of Geraldine Bangerter, please visit our flower store.