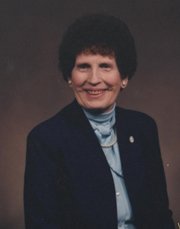 Evelyn Merikofer Wimmer passed away at the age of 91 on January 12, 2019 in American Fork, Utah from heart disease.
Evelyn was born in Vallejo, California on October 9, 1927 to Albert Christian Jacob and Gertrude Vivian Greenland Merikofer.  Her parents moved to American Fork, Utah when she was 18 months old, where she has resided thru-out her life.
She took piano and dance in her youth. Her early education was in local schools, Harrington Elementary, American Fork Jr. High and American Fork High School. She graduated with the AFHS class of 1945, where she was active in band, orchestra, school paper and the yearbook staff.  She also graduated from LDS Seminary that same year.
Evelyn married Leland Pulley Wimmer on February 14, 1945.  Their marriage was later solemnized in the Salt Lake Temple August 21, 1946.  Six children were born to this union; Steven, Sheldon, Raymond, Darrell, Dorinda and Harold.  After the children were enrolled in school, she worked as a local Correspondent for the Deseret News for 15 years.
She was an active member of the American Fork Third Ward, where she had served many positions of leadership.  Relief Society, MIA, Sunday School and Primary.  At the time of her death, Evelyn was serving as Ward History Specialist, a calling she had since 2004.  She also served as the Ward Paper Editor. She served three full time missions with her husband.  Baton Rouge Louisiana 1989; England Birmingham 1992; England London 1994.
Evelyn enjoyed keeping historical journals and scrapbooks for her family. She was a great genealogist and temple goer.  Many people on the other side, will thank her for her hours of research on their behalf and for the work that she had done for them.  She had a love for travel, having visited all 50 states and 11 European countries.
She had been an active member of the Utah TOPS (Take Off Pounds Sensibly) for 52 years. She chartered the first chapter (UT#119) in American Fork in 1967 and remained an active member until her passing. She held many leadership positions in the organization. She has been a KOPS (Keep Off Pounds Sensibly) for 45 years; and was recognized internationally.
She is survived by her husband and her children Sheldon (Mary) of Alpine, Utah and DoriLynn Roberts (Gary) of Lehi, Utah.  Her daughters-in-law Pat Wimmer, Linda Wimmer of Orem and Ruth Wimmer of Hyde Park. She had 18 grandchildren and 41 great-grandchildren. She was preceded in death by her parents, sister and her sons: Steven Lee deceased 1946, Darrell Glen deceased 1999, Harold Chris deceased 2005 and Raymond Charles deceased 2015 as well as one great grandson.
Funeral service will be held Saturday, January 19 th at 11:00 a.m.  in the American Fork Third Ward located at 165 North 350 West.  A viewing will be held Friday, January 18 th at the Anderson Son's Mortuary at 49 East 100 North, American Fork from 6-8 p.m. and at the church 9:45-10:45 a.m. prior to the funeral.  Burial in the American Fork Cemetery.