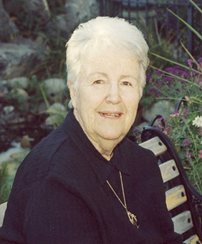 Esther Cook Bateman, 97 of Alpine, Utah, passed away on December 11, 2018.  She was born September 15, 1921, to Jesse L. and Mary Hayward Cook in Idaho Falls, Idaho. Esther lived in Idaho Falls, Bountiful, Syracuse, American Fork and residing her final 79 years in Alpine, Utah.  Esther married Ray C. Bateman January 15, 1940, sealed for all time and eternity in the Jordan River Utah Temple on January 16, 1990.  Together they had seven children.  Ray passed away in 1967, which left Esther to raise the last five of her seven children on her own.
Esther retired from the United States Postal Service on March 20, 1982, working fourteen years as a sub and an additional eight years as a full-time carrier.  After retiring she served an LDS Service Mission at the LDS Employment Center in American Fork, Utah from August 1986 - August 1987.
Due to a hip fracture in 2014, it became impossible for Esther to remain in her home living on her own. Esther became a resident at the River Meadows Assisted Living facility in Alpine, Utah in July 2014.  The Family wishes to extend their sincere appreciation and gratitude to the administrators and dedicated personnel at River Meadows who have strived diligently to care for our proud, spunky, outspoken, determined mother during her time there.
Esther is survived by sons David Ray (Kathleen), Harold Cook (Maria), daughter-in-law Bonnie Bateman; daughters Joan (Larry) Caldwell, Maxine (Roger) Covington, Marianne Christensen, and Phyllis (Pat) Beatie.  25 grandchildren; 71 great-grandchildren; 32 great-great-grandchildren.  She was preceded in death by her husband Ray Clark, son Douglas Grant, son-in-law Lane V. Christensen, daughter-in-law Lynn C. Bateman, great grand-daughter Becky Jo Barrett, one sister (Irene Laursen) and three brothers (LeGrand, Lloyd, & Charles Cook).  Esther had the difficult distinction of surviving all of her brothers & sisters; her brothers & sisters-in-law; many nieces, nephews, cousins and many friends.
Esther will be remembered for her charismatic, no nonsense personality - no one ever questioned how Esther felt!
A celebration of Esther's life will be held at Anderson & Son's Mortuary Lone Peak Chapel, 6141 West 11000 North, Highland, Utah, on Monday, December 17, 2018. Family visitation will be from 9:45 a.m. to 10:45 a.m., with a short memorial service to follow.  Interment will be at the Alpine City Cemetery.