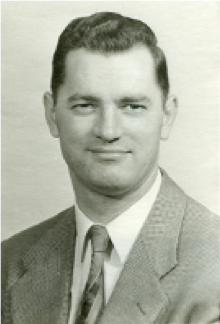 Elwyn Carl Olson, 94, passed away Sunday, March 15, 2020, leaving behind a legacy as an extraordinary husband, father, and grandfather.   He taught his family the meaning of sacrifice and dedication to family, a positive attitude and kindness.   He never spoke badly of anyone.

He leaves behind his four children and their spouses, Brian (Alayna), Greg (Jann), David (Rita) and Laurie (Thayne); his sister Laurene Christensen; 13 grandchildren; 30 great-grandchildren; and three great-great-grandchildren.   His greatest joy was spending time with family, whether watching them perform or enjoying a game of pinochle.

Elwyn was preceded in death by life-long sweetheart, Bonna Vere (Bonnie) Beckstead Olson, who was his first date and wife for 58 years until her death in 2007, and two brothers Arlin (Ard) and Gerald LaMar (Pete).

Elwyn was born January 31, 1926 in Downey, Idaho, the son of Carl Albert and Karoline (Tula) Olson and lived in nearby Virginia, Idaho until departing for his Navy enlistment at Southeast Missouri State College when he was 18.  Following his discharge from the Navy, he achieved two dreams in 1948—his marriage to Bonnie and the completion of his engineering degree from the University of Idaho.

Elwyn spent 32 years of his engineering career at Geneva Steel Works of US Steel.  He and Bonnie raised their family in American Fork where he coached Little league baseball, served as Scoutmaster and Financial Clerk of his LDS Ward, participated in Lions Club, and served as a member of the American Fork Library Board.

Elwyn lived independently until the age of 92 when he moved to Covington Senior Living in Lehi where he appreciated the thoughtful care that he received.

Because of the COVID-19 pandemic and the recommendations provided by the state and federal governments, there will be no public viewing or funeral/graveside services.

To order memorial trees or send flowers to the family in memory of Elwyn Olson, please visit our flower store.