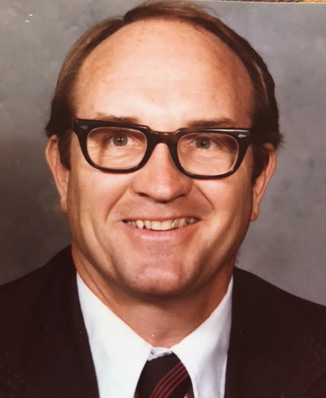 Douglas Alton Mayne was born in American Fork, Utah to Joseph John Mayne and Esther Mooney into a blended family (yours, mine and ours!). Doug was a good-natured child and a playground marble champion. He enjoyed exploring outdoors from “sun-up to sun-down.” Doug revered nature and respected the beauties of the land and the majesty of Mount Timpanogos. He could identify all the birds in the trees, and would mimic their songs, often from his handmade willow whistle. Doug was an avid fisherman and loved every chance he had to catch (and fry up) a rainbow or brown trout.

As a teenager, Doug had many loyal friends. He was the student-body-president of his junior high school. Doug was proud to wear the American Fork Cavemen basketball uniform. He perfected the long-range jump shot before it was awarded three points and was always happy for a team victory.

In 1952, Doug married Janice Dean, his high school sweetheart. Together they raised four children. The values of hard work, education, and the importance of family were not only preached, but practiced.  Doug was proud to be an American and voted in every election. He served in the Utah National Guard and in other civic roles. He was proud to be from American Fork and was honored to serve as the Grand Marshall of the Steel Days parade in 2013.

After graduating from his beloved BYU, “Mr. Mayne” chose the rewarding life of service as an educator. He taught hundreds of fifth grade students over a 32-year career. His students fondly remember him reading aloud “Where the Red Fern Grows,” reciting poetry, teaching them to square dance and foxtrot, and even playing with them at recess. Many summers were spent at Clear Creek Camp, helping students from the Alpine School District to see and appreciate the beauties of our world.

Doug was an expert gardener and raised award-winning vegetables. He and Janice had many wonderful adventures and travels with their lifelong friends, the Mowers, Ingersolls, Edwards, Nichols, Robinsons, and Martins.

Doug was an active member of the Church of Jesus Christ of Latter-day Saints. He served in Bishoprics and especially loved playing church basketball. He and Janice served three service missions for their Church. Doug was a Christlike man whose prayers softened hearts and minds.

Doug passed away peacefully. He is survived by his wife of 68 years, Janice, his children, Kathleen (Mike) Boswell, Marsha (Craig) Powers, Douglas (Lorraine) Mayne and Amy (Steve) Robinson and a sister, Arlene Hanks. Doug found incredible joy in his role as a grandfather – and he loved each of his 13 grandchildren and 26 great-grandchildren. He will be missed by all who knew him.

He was preceded in death by his mother and father, and brothers and sisters, Paul Wilson, Edna Cox, Jack Mayne, Hindley Mayne, and Thella Street.

The family wishes to extend a special thanks to Dr. Douglas Mower, a trusted family friend, and his entire Hospice team for the tender care they rendered.

Funeral services will be held by invitation only and will be live streamed via Zoom on Monday, February 1, 2021 beginning at 10:30 am at the link below for those unable to attend.

To order memorial trees or send flowers to the family in memory of Douglas Mayne, please visit our flower store.