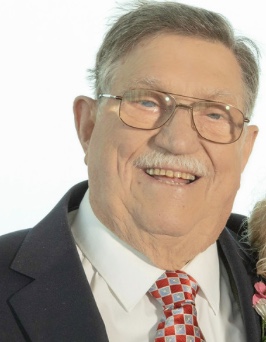 Almer Leroy Colledge, 87 years of life, was filled with love as a daddy, husband, grandpa, uncle and friend.  What a guy.  He was born January 26, 1934 in Lehi Utah to loving parents.  He was especially close with his Mama.  He spoke of her often throughout the years.  He was the youngest of 12 children!  He would always say how often he hugged and kissed his Momma and thanked her for not stopping at 11!  He loved his family and was close to his children and all his nieces, nephews, cousins, and their families.   Al came from a family who excelled in sports. He played High School football, basketball and latter racquet ball as an adult.  It was always fun to sit with Al and watch basketball or football games.

Al was married to the late Marilyn Farrer and together they had 4 beautiful children.  They moved to Heber where they raised their family.  Heber was a great place to live and to raise kids. Many fond memories were made during their time in Heber City.

Al loved being active and his healthy habits served him well.  He enjoyed many camping and road trips with his son, daughters, and grandchildren.  Many precious memories were created on these trips.  Al was a history buff, and his camping trips lead him to many historical locations all over the west.  In later years, after losing some of his sight he spent many hours listening to books on tape of stories and histories of the western United States and the interesting personalities who lived out their lives there.  He enjoyed discussing all the details.

He worked for US Steel at the Geneva Steel plant in Orem Utah but often added odd jobs to help make ends meet.  He would say it takes a lot of food to feed 4 hungry kids!  As a father he was fun.  Well, actually, beyond fun.  He was a tease and loved making kids laugh and giggle.  He possessed a tremendous work ethic that he passed onto his children.  Saturday morning usually came with Al rounding up the usual suspects, his children, to help clean and organize the garage, the yard, the house, feed the animals, wash cars, and all the time listening to country music!

After retiring from Geneva Steel, he got a call from his eldest daughter, Jeana, to help her for the summer at a guest ranch located in the Sawtooth Valley in Idaho that she and her husband managed.  Working the summers at IRMR (Idaho Rocky Mountain Ranch) became a 7-year run.  He was incredibly loved at the ranch by the guest who came to stay, the crew, and people in the community.  He recruited his great grandson and granddaughter to come spend the summers helping too.  It was a great time in his life.  He was affectionately called the ranch hand, but his duties varied and included odd projects starting the morning fire in the lodge, drinking coffee while visiting with lodge guests, and playing music on the large front porch at night.  He was joined Jeana and a myriad of other musicians on that porch overlooking the Sawtooth Mountains. He was a kick.

He also worked at Deer Valley during the winter as part of the security and guest services team.  He was highly valued and well-loved there as well.  He told the story of how the baker knew of his love for cookies and would hide them from him.  He would say “can you imagine a man my age crawling around on the floor with a flashlight looking for the hiding spot of those dang cookies!”.  His kids and grandchildren loved an added benefit of Al working at Deer Valley as he shared with them the free ski passes that came with the job.

Al later married his sweet bride Carole Matteson and they moved to Kamas, Utah.  Al loved their time in Kamas, and the many close friends they made there.  Al and Carole particularly enjoyed road trips and rides together.  He also enjoyed his children and grandchildren who lived nearby and spent time with each of them.  He loved his little house in Kamas and spent time fixing up the yard with flowers or working in his shop.  Many a time children and grandchildren stopped by to wash their cars with him while listening to his favorite country music.  A favorite activity of Al’s was to sit outside in his yard and play his guitar and sing his favorite tunes.

Al possessed a wealth of wisdom he often shared with all who knew him. It was a tender but gutsy wisdom that comes from life lessons.  His simple but powerful words were “spot” on and provided at times healing, encouragement, direction, support, and humor.  He was a special kind of role model to his family and truly everyone he met.  He used to say, well I’m just like an umpire, “I call em the way I see em”

Al was well loved by all who met him.  He considered himself just a hard-working common man, but he could talk to anyone.  He knew no strangers. He had the ability to make anyone he conversed with feel comfortable.  He definitely made each of his children and grandchildren feel that they were each individually his Number 1.

Al loved music and started playing guitar at the age of 14.  He played in country bands and shared his music with his kids and grandkids.  I’m sure there are many of you here today who have a harmonica that Al gave to you with his simple instructions on how to play it!  He could sing and yodel and taught his kids many fun ballads and songs.

When he lost some of his sight and is health began to fail, he and Carole made the decision to move to his youngest daughter Janette’s home.  Janette and her husband Brad provided a comfortable accommodation for them and his last years were full of the comings and goings of many friends and family.

Al also shared a very special relationship with his sister Leona.  They were the last living children in their family. They spent many hours talking and laughing on the phone.  Al said they talked about everything and he commented “what’s said on the phone stays on the phone because sometimes we talk about our kids”.

All through all his health struggles he would often comment how he felt so very blessed.  He never complained but had a great attitude to just try harder to do all he could to improve. He had a tenacity that was never ending.  Recently he said, “I know that the good man upstairs knows me, and that he knows I know him”.   He stated "I know he understand me, and I understand him. It’s all good”.

Al’s passing leaves for each of us a void in many ways.  If you measure a man’s wealth by how he was loved, then Al Colledge was a very wealthy man.  One of Al’s son in laws texted a message that said “My entire family sends their love, thoughts, and prayers to you and your extended family. Misha and John were so fortunate to have Grandpa Al in their lives…and they know it!!  I never knew either of my grandpas and I realize the hole that leaves in your life”.

Al filled a lot of holes for all of us.

Funeral services will be held Saturday, February 6, 2021 at 11:00 AM in the Anderson and Sons Mortuary, American Fork Chapel, 49 East 100 North, American Fork, Utah.  A viewing will be held from 9:45-10:45 AM at the Chapel prior to the services. Due to COVID restrictions please see the SignUp Genius link below to schedule a time to attend the viewing.  Burial will be in American Fork Cemetery.  Please share a memory of Almer on his tribute wall.

To order memorial trees or send flowers to the family in memory of Almer Colledge, please visit our flower store.